Who doesn’t love a good end-of-year round-up? You may have seen our top picks for Christmas adverts in a recent blog post, and now we’ve put our heads together to pick our favourite campaigns that pushed the envelope this year. Has yours made the list?

This award-winning campaign created by adam&eveDDB, featured a mix of celebrities, members of the public and Lloyds staff taking part in a guessing game with sticky notes that depicted mental health conditions. The adverts aimed to remove the stigma of mental illness and encourage people to talk to one another about it.

We love it when brands take a risk, and Nike certainly did that this year. Created by Widen+Kennedy, the ad featured American footballer Colin Kaepernick who at the time was a controversial figure in the US due to his decision to kneel during the national anthem to protest racial injustice. His actions split opinions across the states, which made Nike’s decision a bold one, especially with the accompanying strapline of ‘Believe in something. Even if it means sacrificing everything’. 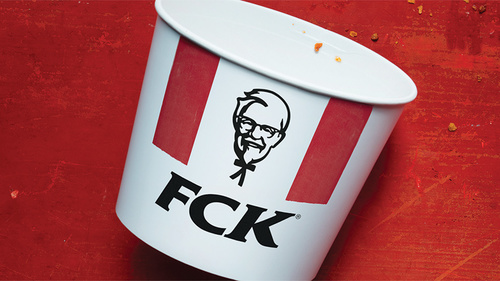 We had a sneaking suspicion this print ad might make our end-of-year list. An impeccable (pun?) demonstration of effective crisis comms, KFC released the cheeky ad after it was forced to shut hundreds of its restaurants in February following a chicken shortage. Instead of adopting a serious approach, KFC rearranged its letters to make FCK in a national print ad created by Mother London which apologised to the general public. Luckily, the UK saw the funny side and sales of buckets weren’t affected.

SpaceX takes a Tesla into space

It didn’t get more random than this. In a move that had ad execs exploring a new galaxy of opportunities, Elon Musk’s enterprises SpaceX and Tesla teamed up to send a Tesla Roadster to space. You have to see it to believe it, but the stunt was a resounding success, drawing millions of viewers and thousands of pieces of press coverage.

The campaign that had the most significant impact on us came from charity Campaign Against Living Miserably (CALM) and shaving brand Harry’s to increase awareness of male suicide in the UK. Project 84, saw the sculptures of 84 males placed on top of ITV’s This Morning studio and South Bank building, signifying the number of men who take their own this every week. The installation, created by adam&eveDDB and US street artist Mark Jenkins, formed part of a larger campaign by CALM, which is calling for real government action on suicide. It had an incredible response, with 34% more people reaching out to CALM for help and enough signatures on CALM’s #StandAgainstSuicide petition.

It’s been another wonderful year for creative thinking, with the UK making its mark across the world with outstanding and impactful campaigns. Stay tuned to the Henry Nicholas blog for our top marketing picks throughout 2019.

Want to win the war on talent? Time to become exclusive
Posted by John Austin

Does size matter when trying to attract talent?
Posted by John Austin